In my wanderings in the wilderness that is Brimfield, I found a large crate of wonderful old cylindrical wax records. I purchased them for their lovely packaging without knowing too much about them. I have since done some research into these fascinating musical artifacts. Most of the lot that I have were made by Edison, but a few were from Columbia Records (which is still in business today.)Edison invented the cylindrical records and player in 1877 and they gained in popularity through the turn of the 20th Century. Competition with Columbia Records was fierce until the early 1910s when Columbia's new disc records played with a steel needle eclipsed the more fragile cylindrical records. By 1912, wax cylinders were no longer being produced. 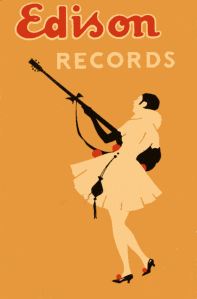 Edison sold 2-Minute wax Gold Moulded Records in these ornately decorated boxes. The box on the left is an earlier version and the one on the right is a later version used just prior to the introduction of 4-Minute wax Amberol cylinders in 1908. These record boxes are very substantially made with cotton padding on the inside to protect the fragile wax records. 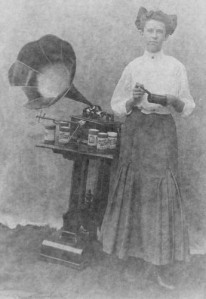 If you would like to see or purchase one of these records, I will be bringing them to the Brooklyn flea and selling them for a modest $7 each.